A Beautiful Documentary of Macaronis

Check out this video to get to know Macaronis Wave (if in Indo view with Opera browser using VPN, as Vimeo not available in Indo).

Macaronis Surf Resort is like no other on earth…

Imagine, empty white sand beaches extending into the clear turquoise ocean where perfect waves peel around the reef on both sides of the bay… it’s the kind of place dreams are made of!

Voted by the pros as the ‘funnest’ wave to surf on the planet, Macaronis is undoubtedly one of the world’s surfing wonders, and most consistent and rippable left-hand reef breaks.

Greenbush and Roxies are other nearby classic breaks within striking distance of the best Mentawai Surf Resort for Surfers and Non-surfers! All Accommodation Packages Are 50% OFF!

No matter where you are, don’t miss this opportunity! We’re now more affordable than ever for a visit before March 31st, as we’re offering 50% Off on all guest packages!

We’re also offering 50% Off for surfers in the peak season, only on rooms that have been vacated due to others being forced to re-schedule – Strictly Limited Spots! For more info click HERE

Additionally, all guest accommodation is raised up from ground level with exceptional amenities and an incredible 360° views of the lagoon and ocean. Most ground-level bungalows in the Mentawais do not have such wonderful sea-breezes, and the comforts gained in a nicely insulated building.

Catering to the family surf holiday, children under 6 are free and non-surfer & beginner guests visit at half Surfer rate! All-inclusive surf trip packages offer our most popular trip duration of 8 days surfing, or up to 29 days surfing by choosing our Membership Package.

For those who don’t surf, there are heaps of fun activities accessible right from the resort doorstep including snorkeling, kayaking, stand up paddling, jungle walks and the opportunity to learn surfing at the most fun and gentle beach break, Fishfingers! 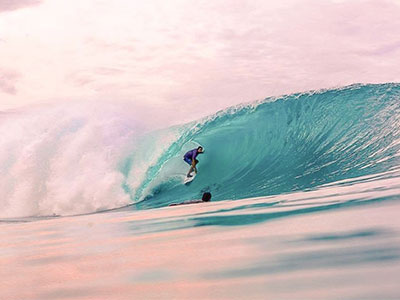 Surfers, Book Early to Save up to 30% Off
Beginners & Non-Surfers, Stay at Half Price & Kids under 6 are Free!

Save Up To 30% Off Trip Packages!
Early Planners Bonus! Book Early, Save More!

April – October is regarded as the most consistent time for larger waves in the Mentawai Islands and Macaronis. This is when the Indian Ocean is producing storms regularly and swell is usually more intense from all directions. May – September will likely book out the quickest.

March & November are considered shoulder months, where world class surf can still regularly be scored with less people around. March especially offers a great opportunity, as warmer weather and optimal surf conditions keeps most surfers in the Southern hemisphere closer to home.

December – February is the Summer Season, where glassy surf in the 2-4 ft range is still common, with low or no crowds and occasional larger swells. Dominant South swells are ideal for Macas and Greenbush. At this time you can book to take part in our annual Surf Coaching Clinics held in January and February, which include surf coaching and photography package.

Want a closer look at conditions throughout the year?  Check out the video archives from every month of the year!

What Guests Are Saying…

“Another great trip surfing Macaronis with awesome people and no crowds! I will be back as soon as I can! Cheers to all the Macaronis team and see you very soon”

“I have no words to describe the feeling of this empty perfection! Simply Epic! Thanks, Macaronis, you touched my heart. “

Should have done it sooner!

“It was an epic week, should have done it sooner. The coaching was awesome, same as Guy’s teaching. Got so much out of it, improved more this week than in a year. Thanks to the Macaroni staff who looked after us really well. Until next time “

Helped me progress my surfing so much in a short time!

“Amazing week at Maccas! Everything this week was awesome. The instruction/guidance provided by Guy and Dedi has helped me progress my surfing so much in a short time. Macaronis hospitality was great and the group inspiring. To experience Macaronis on a clean barreling day is something will be talking about for some time! Yew “